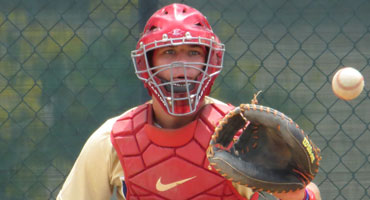 Mears explained that he has been with the Cavs for more than three years, dating back to when the organization was known as the So Cal Cavs. According to Mears, this 16u Cavs team started out with CBA three years ago as a 14u team and practically serves as the Cavs’ flagship team.

“This is the group that actually started the program and we have a few studs on the team right now,” Mears said. “We’ve been doing pretty good. The chemistry is right, they’ve been jelling and they know each other. A lot of them play on the same high school baseball teams.”

There are some high school tie-ins, to be sure, which in turn lead to “stud” tie-ins. Highly ranked Cavs 2016 catcher Aaron Greenfield, 2016 middle-infielder Jaylon McLaughlin and 2016 first baseman/outfielder Dejuan Johnson all just completed their sophomore years at Westchester High School in Los Angeles.

There is a sense of familiarity with this team, but when really digging deep into the “stud” factor it is best to start with the trio from Westchester High, and also best to start with one young prospect in particular. Greenfield, a 6-foot, 170-pound 15-year-old from Los Angeles, stands at least a head and possibly a shoulder above the rest right now.

“It’s fun playing with everybody because there’s a lot of different talent out here and there’s a lot of good pitching,” Greenfield said. “I look at it as a good cultural diversion playing out here. This has been a real fun experience playing for the WWBA (championship); I just love playing the game and staying out here all day. I helped coach the CBA Cavs 2018 team and that’s such a fun experience.”

That’s right. In the two hours before he was set to take the field for the CBA Cavs’ 16u team’s third of four pool-play games on the Chicago White Sox side of the Camelback Ranch Complex, he was over on the Los Angeles Dodgers side helping coach a group of eighth-graders. And listening to Greenfield talk, it’s easy to identify where his desire and willingness to teach youngsters comes from.

Greenfield told PG he’s been playing baseball since he was 2 years old and credits his mother, Christie Chontos, with encouraging him every step of the way. Chontos is a former collegiate softball and volleyball player.

“She’s been pushing me ever since I was a young boy,” he said. And she just may have pushed her son to a level of play neither could have imagined when young Aaron was a toddler.

“Aaron Greenfield is a special talent, a 15-year-old Westchester kid,” Mears said. “He’s got an outstanding arm and great plate discipline, and he’s a really special player. I think he’s going to transcend to the next level perfectly. He handles the pitchers very well, he’s very coachable, he loves the game and he loves to learn the game. He’s a real stud, just a real stud.”

And on Sunday afternoon he wasn’t the only “stud” Mears had on his roster. It took a collection of talent to lead the CBA Cavs to the Pool H championship with an 8-0 win over AZ Pro 16u out of Phoenix and secure a spot in Monday’s 16u West Memorial Day playoffs regardless of the outcome of their final pool-play game Sunday night against Warriors Baseball Academy 17u.

The Cavs previously beat the Angels Select Team Blue from Tempe and the UA Prime out of Aurora, Colo., and won their first three pool-play games by a combined score of 26-3. Greenfield, McLaughlin, Phelps, 2015 outfielder/right-hander Charles Grant-DeBose from Torrance, Calif., and 2016 third baseman Tony Yanez provided the bulk of the Cavs’ offense in those first three games.

Five Cavs’ pitchers worked 16 2/3 innings in the first three games and allowed two earned runs (0.84 ERA) on 12 hits while striking out 20 and walking eight. Grant-DeBose allowed only two hits during four shutout innings and struck out seven and walked one.

Those performances were right in line with what the CBA Cavs organization hopes its players will achieve. Mears calls CBA “one of the best organizations in California.” It is one that works to develop its young players so that, first, they’re ready to compete at the high school level – which is a very high level, indeed, in California – and, second, at the collegiate or professional level.

“And this is one of the best groups I’ve ever had,” Mears said. “I don’t have to babysit them, they know what to do and they know situations. All I have to do is manage the game; these guys are ready to go to the next level.”

Mears also felt it was important this group made the trip over to the Phoenix suburbs to compete in this particular Perfect Game tournament.

As for Greenfield, his whole development process is really just beginning, considering he still has two more seasons of high school baseball remaining. His sophomore season at Westchester was a good one, with MaxPreps.com reporting that he played in 20 games, hit .344 (21-for-61) with three doubles, a triple, a home run, 21 RBI and 11 runs scored.

Greenfield would like to continue to catch simply because he enjoys playing the position so much. If at some point down the line a coach or a scout recommends a position change he wouldn’t fight it, however, because he said, “I’m still playing the game.”

“I do like staying tuned into the game and I get to call pitches sometimes,” he said of his love of catching. “I’m just into the game the whole time and I feel like the real leader on the field.”

Greenfield will lead the CBA Cavs into Monday morning’s quarterfinal round of the 16u PG WWBA West Memorial Day Classic playoffs at the Goodyear Ballpark Complex with only one expectation.

“When I come into a Perfect Game event I always expect my team to go to the playoffs and end up in the championship game. If we lose, it’s a disappointment,” he said.

It’s an expectation shared whole-heartedly by his coach.