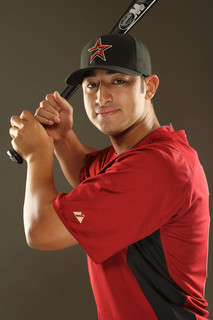 Drafted in 2009 in the 1st Round (21st pick) out of Bonita High School by the Houston Astros, he currently serves as the Double-A affiliate Shortstop. He played 4 years in high school under Mike Spiers and the ABD Bulldogs and was awarded the Rawlings Gold Glove in 2009 as The Best High School Shortstop in the country. Mier was ranked as a top 10 prospect in the Astros organization from 2009-2012 and was ranked the #1 shortstop in 2010-2011. In 2013, he was ranked by Baseball America the 18th best shortstop in the minors and 4th best in the Double-A level. In 2012 I played in the Arizona Fall League where he hit .296.

During his offseason, he will serve as an infield and hitting instructor with the youth academy and high school players. CBA welcomes Jio to its staff!