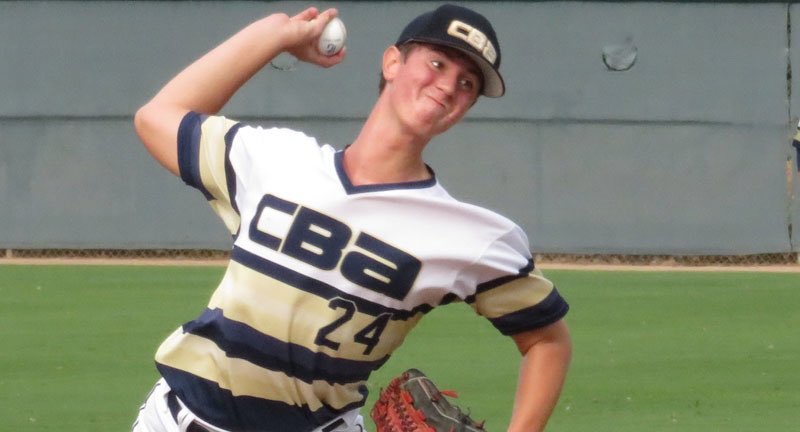 CBA rides the Wave out West

GLENDALE, Ariz. – The reality of travel ball baseball in 2017 is that whenever the three letters “CBA” are at the forefront of a team’s name, it’s safe to assume that team will be one that needs to be reckoned with at some point during a Perfect Game tournament; usually in the playoffs.

And so it came to be this weekend at the inaugural PG WWBA Underclass National Championship Protected by G-Form, with the San Diego-based CBA Wave Gold – a team that is young even while playing in a tournament with the “underclass” designation – drawing a lot of interest.

Thanks to the tried-and-true recipe that calls for ample amounts of both timely hitting, shutdown pitching and above-board defensive play, the Wave Gold rolled to impressive victories in their three pool-play games at the Under West, and launched themselves into the 16-team playoffs, which begin Sunday.

The Wave Gold were dominating to the point of suffocating in their three pool-play wins, at least from the perspective of their opponents. They outscored their three pool partners by a combined 17-1 and out-hit them by a combined 27-4. Five Wave Gold pitchers toed the rubber and allowed one earned run in 17 innings (0.41 ERA) on those four hits, striking out 23 and walking five.

“The guys have done a really good job with the bats, getting on base and producing runs; finding ways to put ourselves in situations where we can score some runs,” CBA Wave Gold head coach Chris Davidson said Saturday morning from the White Sox side of the Camelback Ranch spring training complex. “And if the guys continue to pitch (this way), I think we’re going to go a long way.

“They’ve surprised me with how comfortable they look at the plate and on the mound,” he added. “They seem to be stepping up to the challenge and doing all right.”

The CBA Wave Gold learned late Saturday afternoon that they had earned the No. 1-seed in the playoffs and will face the No. 16 Canyon Thunder (1-1-1) from Phoenix in Sunday morning’s first-round at Camelback Ranch.

Win that and it’s a quarterfinal later in the day, also at Camelback, with a chance to earn a spot in Monday’s final-four at the Goodyear Ballpark Sports Complex. The other top-four seeds are the No. SACSN National Team (3-0-0), based in Jupiter, Fla.; the No. 3 West Coast Clippers 2019 Murietta (3-0-0) from Wildomar, Calif.; the No. 4 Slammers Bote (3-0-0) out of Englewood, Colo.

2020 right-hander Fisher Pyatt (San Diego) set the bar for the pitching staff when he threw a complete-game two-hitter with 11 strikeouts and one walk in a 6-1 tournament-opening win over MBA Utah (South Jordan, Utah) on Friday.

Then, on Saturday morning, 2020 righty Desmond Cabanilla one-upped Pyatt’s performance with a five-inning, five strikeout, two walk no-hitter in an 8-0 win over the Southern Nationals 15u Blue (Buckeye, Ariz.).

“We’ve been preparing for this (tournament) for about a month-and-a-half now,” Pyatt said Saturday. “Some of our core guys are playing football right now so we’re out here trying to do our best with what we’ve got. … This just shows how much we want it. When we want to compete, we do pretty good.”

The team plays with a lean 11-man roster, and 10 of the prospects are in the class of 2020 – high school sophomores. Only Murphy, an Oregon State commit ranked No. 491 nationally in the class of 2019, is a high school junior. He is also the only player on the roster who isn’t from Southern California.

“We’re definitely playing up,” Davidson said. “They’re young, but they’re really confident and they definitely love to compete no matter what the age-group is. I’ve coached a couple of these players before and I knew that they were definitely going to be competitive with the older kids, and they proved that the first two games.”

The CBA Wave Gold is part of the ever-growing CBA (California Baseball Academy) organization under the direction Jon Paino. There are six CBA teams at this weekend’s Underclass National Championship, and next weekend there will be four at the Upperclass West – including national power CBA Marucci – and two at the Freshman West.

There are a handful of players on this roster that played together at tournaments over the summer, and Davidson gets a genuine feeling that they have a lot of fun with each other while also staying competitive within the group. Teams that are able to strike that balance are usually the ones that are most successful at PG national championship tournaments.

“They’re pretty fun guys – they like to have a good time – ad I think that really helps,” Davidson said. “It keeps them more relaxed out there, especially when they’re surrounded by their friends.”

Murphy, who plays the outfield when he isn’t pitching, started this summer playing with the Southern California-based SY Titans but Paino invited him to come play with CBA Marucci at the 16u PG WWBA National Championship in Emerson, Ga., in July.

Murphy turned in a PG all-tournament performance at the national championship event and a bond was formed between the player and the program. He will play with Marucci again next weekend at the PG WWBA Upperclass West National Championship Protected by G-Form and at the PG WWBA World Championship in Jupiter, Fla., in Oct.; next year is an open book.

“I thought I’d get some at-bats and get ready for (the Upper West), and these guys have been good enough to have me; it’s been fun,” Murphy said when asked how he feels playing with this talented group of 2020s. “This is my second day with them but it feels like I’ve been playing with them for a while. CBA is just a big family, basically, so we’re all pretty close.”

Davidson, a recent graduate of West Virginia Tech where he was a four-year member of the school’s baseball program, doesn’t have any magic words for his young players before they take the field, only telling them to go out there and stay relaxed and have fun.

He reminds them that baseball is a kids’ game and they should all feel blessed they’ve been given the talent and the opportunity to play it at a high level.

Based on his own college experiences, he is able to pass some things on to the CBA Wave Gold players, although he confided that he is sometimes disheartened when he finds out some of them play at a higher level than he did when he was their age.

But Davidson tries to help with the mental aspects of the game as much as possible, and Davidson also noted that CBA is very good about helping their prospects with the college recruiting end of things. “I wish I would have been a part of a travel ball organization like CBA when I was coming up,” he said. “I think my path would have been a lot different than it what it was.”

The Wave Gold players will get up in the morning and feel good about slipping on their CBA jerseys, but even those three letters can’t guarantee success. That has to be earned.

“You can’t take anybody lightly,” Murphy said. “Just because they might be from on particular state, you can never take it easy because that’s when they’ll come out and bet you. With baseball, you can get beat anytime by anybody, so you’ve got to bring it every day.

“Just being CBA and knowing that the program is always pretty strong, we always come in expecting to be among the best. We feel like we can win this thing.”