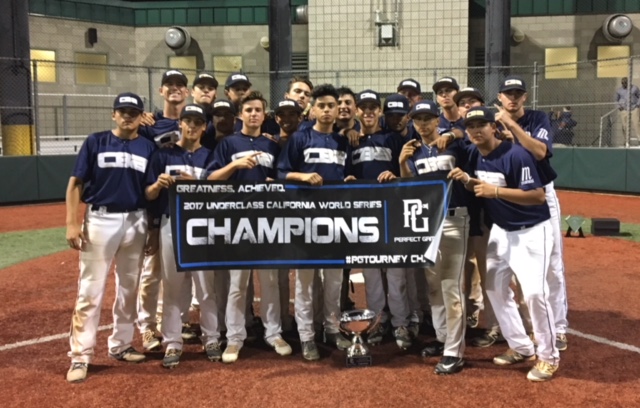 IRVINE, Calif. – In a highly contested game between two evenly-matched opponents, CBA outlasted the OC Sun Devils by a final score of 6-2 to secure the championship of the Underclass division for the California World Series. In a back and forth match, CBA finally came away on top by the end of the game after a late push.

The scoring started early on for CBA as they pushed a run across in the bottom of the second inning. Catcher Gabe Briones drove a ball to the right centerfield gap for a run-scoring triple to give CBA the 1-0 lead. The OC Sun Devils struck right back, however, as in the top of the third Jacob Sharp battled for a ten pitch at-bat that culminated with a two-run single.

CBA put another run up in the bottom of the third as Cody Freeman notched his second hit of the day, this one a RBI single to tie the game at two runs apiece heading into the middle innings.

The score would remain tied until the lead was captured by CBA in the bottom of the fifth inning. After reaching base via an opposite field single, Jasiah Dixon worked his way around the base paths until he was on third. Next, a heads up play allowed Dixon to score on a ball in the dirt blocked by the catcher; his speed and instincts shined on the play and allowed CBA to head into the sixth with the lead.

The flood gates opened ever so slightly in the bottom of the sixth inning as CBA added three more runs to make the score 6-2 heading into the final frame. Corey Sanchez came in to close the game out following a strong start from Christian Bodlovich who threw six innings while allowing only two unearned runs to come away with the win.

The depth of the CBA ball club really shone as manager Jon Paino utilized a bunch of different rosters and positions to get positive performance. The group played consistent, fundamental baseball and it paid off.

“I think this weekend showed the depth of this group,” said Paino. “Every game we had a different combination from the middle infield, to the corners, to the catcher position; we just showed the depth this group has. No matter who we put out there they perform and excel as a group.”

The pitching staff was undoubtedly a positive for CBA as they only surrendered nine runs over the five games. Paino preaches location and command which his pitchers showed him over the weekend.

“We want our pitchers to be able to pound the zone with the fastball, first and foremost, as well as be able to locate the breaking ball,” said Paino. “We threw probably twelve or fourteen guys over the course of the tournament and each guy went in and performed well. That is a testament to the depth of the 2019 class, and not just our class but across the state of California.”

Jupiter is on a lot of minds as we head into October, and Paino is no different. A number of players on this CBA team will be with the team when they travel to Jupiter, and Paino’s excitement is certainly understandable.

“This put a good cap on a fun year with this team. We’re looking forward to Jupiter; we’re taking some of the 2019s with us to Jupiter. For the group, we ended a fun club season on a positive note and whatever happens, happens in Jupiter, we’re excited and glad to be there.