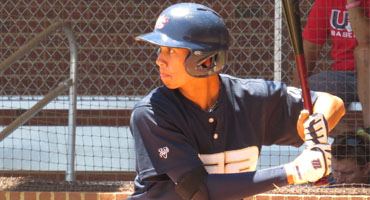 Sam Breznas
Published: Wednesday, July 16, 2014
www.perfectgame.org
EUHARLEE, Ga. - With a 7-0 record out of pool play in the WWBA 16u National Championship, CBA Marucci is undoubtedly a team full of talented players. Among them are two very special talents, Blake Sabol and Blake Rutherford.

Rutherford has an average of .389 and has hit two home runs so far in the tournament. Sabol has been flawless behind the plate and has shown great power in his swing.


Sabol, a 6-foot-3, 190 pound catcher from Aliso Niguel, Cal., comes from a family of ball players. His brother, Stefan, was a Perfect Game All-American, and was drafted by the Mets in 2012. His father played two years of college baseball at Long Beach State.

“[My father] and my older brother have a big influence on me in baseball,” said Sabol, “I was always around the baseball field ever since I was a little kid so this is basically my life.”

His passion and knowledge of the game shows in him holding the No. 19 spot in Perfect Game’s class of 2016 national rankings. He is ranked No. 3 in the state of California and was named a 2014 underclass third team All-American.


“It’s an honor being ranked up there with some of the best players in the nation. I know a lot of the guys and it kind of pushes me every time I see those rankings to keep trying to get better and move up higher,” said Sabol.


Sabol competed in the Sunshine West Showcase in June, and was named to the top prospect team.


“The Sunshine West Showcase was a lot of fun. I played with a lot of my friends over there in California and we also had guys from all over, from Arizona, Vegas,” explained Sabol, “You don’t just get to play with your own team who you’re familiar with, you get to play with a bunch of new guys and it’s nice to meet new people and see how they play and compete.”

Sabol not only has an idea of playing with and against players from different parts of the country, but after playing for this year’s 15u National team, he has competed against teams from all over the world. He was invited, along with 19 other players, to represent the U.S.

“The 15u USA National team was the most amazing experience of my life. There were a lot of close games against Cuba and Panama, but it was so cool getting to play against other countries because they play the game a lot differently from us. It was a lot of fun and we got to bring home the gold to where it belongs,” said Sabol.


When not playing for his high school team or Marucci, Sabol plays on the Yankees scout team with some of the top prospects in baseball.

“My older brother played on there when he was a sophomore and I used to be lucky enough to go hit BP (batting practice) with them ever since elementary school and middle school,” explained Sabol. “I finally got my opportunity to go out and play with those guys my freshman year and it was a lot of fun. I was kind of nervous at first playing with all the big guys, but then you get to know they’re all just kids too and baseball is baseball and it’s a lot of fun.”


Having an older brother has really influenced Sabol in his baseball career’s decision making process. Because his brother has already gone through the process, he is remaining uncommitted for the time being. He is also focusing on finding the right school for him that provides not only a good baseball program, but also good academics.


“I never grew up with a dream school or anything, so I’m kind of weighing things around,” explained Sabol about choosing a college. “I’m really interested in schools that have good academics because college is a big deal to get to the next level in life. I’m also looking at the best programs around: Stanford, Oregon, USC, Vanderbilt and there’s still more to come hopefully. I’m still trying to figure out where I fit in, but wherever I go I know I’m going to compete as hard as I can.”

The head coach of CBA Marucci, Daylon Monette, has watched Sabol grow as a player since he was 11/12 years old.


“He’s a great, hard-working kid,” said Monette about Sabol. “He had a brother who was a top prospect a few years back so his name’s definitely out there. There’s always some pressure on him to perform and live up to that expectation of his brother, being an All-American, but he works hard every single day to carve out his own niche and I’m extremely proud of him.”

Along with Sabol, Monette has been coaching Rutherford for many years as well.

“He’s really come into his own with his lofty ranking,” said Monette about Rutherford. “I haven’t seen anyone with his advanced approach at this young of an age in a long time. He continuously pushes himself every single day to get better. He’s not complacent at all with where he’s at so I definitely think he’s destined to do some great things because of that work ethic.”

The 6-foot-2, 185 pound outfielder is ranked No. 3 on Perfect Game’s class of 2016 national rankings. This high ranking provides him with a lot of pressure, but also the drive to get to that No. 1 spot.

“I’m really blessed to be ranked No. 3, but it also means I gotta come out and play my best game every day, day in and day out because you never know who’s coming to watch. I want to represent that No. 3 spot really well.


“I’m always going to give it my all, but it’s truly an honor because I know there’s a lot of really good players out there, especially on my team, and I know things can change, so I just try and work every day and get better so I can keep that ranking and hopefully go up one day,” explained Rutherford.

Rutherford was named MVP of the Perfect Game 16u MLK Championship in January. He was also named a 2014 first team All-American. He competed in last year’s Underclass All-American games and is prepared to return again this year.

“Last year I was one of the only 2016’s. It was really cool. I met some kids from South Carolina, New York, all over. It’s just really cool to get to know them and the competition out there is amazing. Every pitcher you see is the best on his tem or the best in his state,” explained Rutherford. “It’s an honor to be an All-American. I hope I represent California and myself well out there again this year. I’ll be a little more relaxed this year because last year I was a little tense, but it’s definitely a lot of fun and I look forward to it.”


Rutherford had always dreamed of going to UCLA and was excited to commit to play baseball for them when he graduates in 2016.

Like Sabol, Rutherford also plays for a professional scout team.

“I play with Tom Battista (one of the area scouts for the Boston Red Sox), and I love him, and I love playing with that team,” said Rutherford. “Overall playing for the Red Sox scout team is really good exposure. All of the players I’m really close with, a lot of them are on this team or the older CBA team, so it’s a pretty tight group and I just have a lot of fun playing with that team.”

Rutherford also really enjoys playing for CBA Marucci and said that without the program and his two coaches, he “wouldn’t be where [he] is today.”