5 Major reasons you should think twice about sliding head first 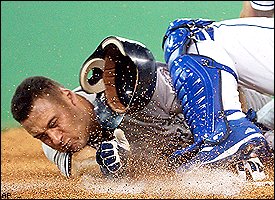 What are the real dangers of sliding head first, is it faster, and is it worth it?

"A 2003 study in the Clinical Journal of Sports Medicine said there was "no significant difference" in speed between sliding headfirst and feetfirst." -foxsportssouthwest.com

As an advocate of sliding feet first into the bag, primarily because it is safer, I've compiled a small list of players who have sustained injuries from diving into bases head first. Let's take a look back at my Top 5 reasons you should slide feetfirst.

5. Rafael Furcal - Los Angeles Dodgers shortstop Rafael Furcal met with team physician Dr. Neal Elattrache and hand specialist Dr. Steve Shin after breaking his left thumb on a headfirst slide into third base during a game against the San Francisco Giants. They determined Furcal doesn't need surgery to repair the bone, but that as expected, he is likely to miss four to six weeks, including minor league rehabilitation time. courtesy of sports.espn.go.com

4. Josh Hamilton - Josh Hamilton called it a "stupid play" that caused him to break his arm during a head first slide. There's growing evidence the stupidity laid with Hamilton's decision to slide headfirst. courtesy of foxsportssouthwest.com

3. Yunel Escobar - Escobar was an opening day starter at shortstop for the Jays. On April 5, 2011 Escobar hit a 2-run walk-off home run against the Oakland Athletics, his second career walk-off home run. On April 6, Escobar left the game after sliding head first into third. He hit his head on third baseman Andy LaRoche's knee, causing a concussion

2. Derek Jeter - In 2003, Jeter tried to advance an extra base on Jason Giambi's comebacker, an attempt to take advantage of Toronto's defense, which was shifted to the right side of the infield. Huckaby ran up the line to field first baseman Carlos Delgado's throw. Jeter dived headfirst into the bag, and Huckaby fell, his shin guard driving into Jeter's shoulder. Jeter immediately began writhing as Yankees' trainers, teammates and Torre gathered around. Dr. Erin Boynton and Dr. Ron Taylor of the Blue Jays also came out to help Jeter, while Huckaby watched anxiously from the dugout with a towel in his mouth. Jeter was called out on the play because he fell off the base when he was hurt. courtesy of si.com

1. Cory Hahn - Arizona State freshman outfielder/LHP Cory Hahn suffered a head injury during the the first inning of the second game of the day. Hahn went to steal second base sliding head first colliding with the knee of New Mexico second baseman Kyle Stiner which caused him to lay motionless behind second base. He was taken off on a stretcher and taken by ambulance to St. Joseph’s Hospital. The injury sustained was kept private, the family only stated that they expected a "slow recovery." courtesy of collegebaseballdaily.com